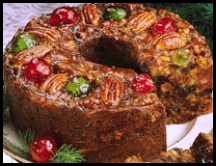 2. Libertarian U.S. president. House and Senate too (in my dreams).

3. Fruitcake from the Collin Street Bakery in Corsicana, Texas.

However, living south of the Rio Bravo makes Wishes 3 and 4 mostly impossible.*

Harry & David ships to Macau and Bhutan, but not to Mexico. The Collin Street Bakery ignores the foreign market completely. Rank discrimination, I say.

There are many advantages to Mexican living, but it’s not perfect — not just yet.

* No. 1 is impossible due to human nature. No. 2 will be impossible until they send all us Mexicans back where we came from. Give each a fruitcake at the border.