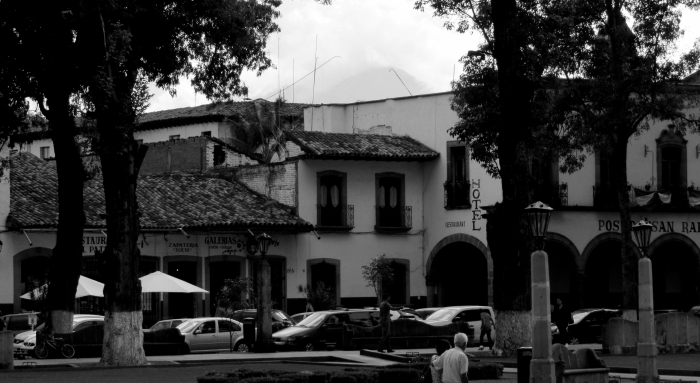 IT’S GONE three consecutive days without rain here, and that’s mighty odd in mid-September. Has the rainy season ended early this year? I rather doubt it.

Most afternoons, after doing lunch at home, I go downtown to enjoy a nice café Americano negro with my Kindle while simultaneously admiring the beautiful babes who walk by. My child bride goes to, but she drives the Nissan because she does different things and comes home later than I do.

It’s not ecological. But I don’t care.

And I usually have my camera. Yesterday I spotted something I’d never noticed before in all the years I’ve walked by the same spot. The mountain in the mist behind the buildings in the top photo. How could I have overlooked that?

On arriving home later, getting out of the Honda, I shot the two photos below for no better reason than the scenes caught my eye, especially the wildly flowering aloe vera bush.

It does this every year. Lasts for a couple of months.

And the final photo shows my white roses. I generally roll my eyeballs at people who post flower photos on blogs because if you want to see flower photos, just do an internet image search, and there are thousands. Take your pick.

No matter. Here they are anyway.

I was inexplicably in a dark mood when I returned home, so maybe I subconsciously thought that snapping the flowers would boost my humor. I don’t think it worked.

I wonder if it will rain today. Cool things off.