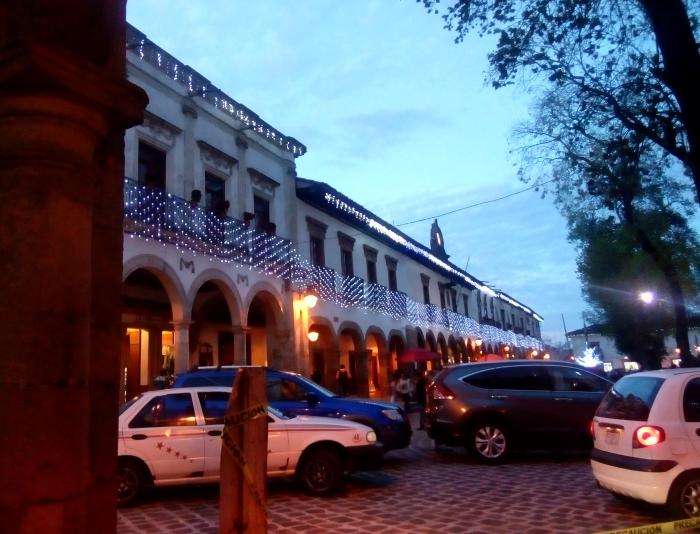 WEDNESDAY AFTERNOON, my child bride opted to sit with me on the far side of the main plaza instead of doing what she usually does on late afternoons, gossiping nonstop with her sister. I think she felt guilty for leaving me alone on Christmas Eve.

I took advantage of her guilt. We sat a spell.

We purchased a couple of pastries at a bakery nearby and sat at the very same coffee shop where I sat solo 18 years ago and, due to the view, decided to move from the state capital here to the mountaintop.

The deciding view on that fateful afternoon was not this view. It was 90 degrees to the left, but that’s not the photo I took on Wednesday. The two white cars are driving by. The two dark cars are parked because the street beyond them is blocked off due to Christmas decorations.

This corner is notable because it is where the final bit of work took place last week that completed the street renovation around the plaza, something that was ongoing for a year or more.

It was a lovely evening, as most evenings here are.

But we also have mornings. Here’s a video I shot in 2011. Nothing much has changed. Morning, smoke, chickens and songbirds.