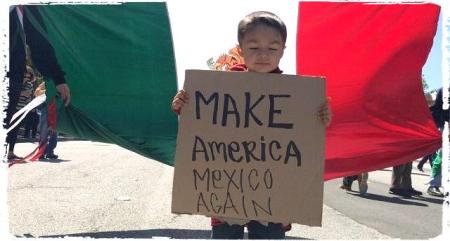 THINGS GO FROM bad to badder in the Nation That’s Eating Itself, which is America, of course.

The photo is from a protest in California that was inspired by the state Republican convention and Donald Trump.

The violent (no surprise — multiculturalists!) protest was attended in large part by Latinos, many — perhaps most — of whom you can be assured were illegal aliens.

Were they all tossed in Paddy Wagons and hauled off to jail as good sense would suggest? Of course not. Not in today’s America and certainly not in left-wing California.

In Mexico, it is against the law for foreigners to get involved in politics. I don’t know what would happen to foreigners who do that because foreigners here are not that stupid.

I imagine deportation would take place even if the foreigner were in Mexico legally as, I wager, most are. Well, those from up north. Those from down south, likely not. They’re just passing through anyway, headed to where the easy cash is.

Make America Mexico Again. Don’t that beat all? And in many zones of the United States, it’s already taking place.

With the blessing of the Democrat Party.