NINETEEN YEARS ago, I received the first and last visit from family members above the Rio Bravo. My mother and sister. I picked them up one evening at the Guadalajara airport and, as we drove to a downtown hotel, my sister asked:

Are most of the people who live here Mexican?

She was 59 at the time and had never been to a foreign country. It was her first and last trip outside the United States. She’s 78 now and, I imagine, will never leave her homeland again. She prefers the craziness of California.

After one night in the Guadalajara hotel, we took a bus to the neighboring state’s capital where I was renting a house. A couple of days later, we boarded another bus to the mountaintop town where I live now and stayed in a hotel for four nights.

And during that time on the mountaintop — before I moved here, mind you — we took a taxi to a small town on the edge of our large lake, a town with the mouthful of a name Erongaricuaro, also known simply as Eronga because it’s easier to say.

A chicken bus pulled up, one of those ancient, smoke-belching, retired school buses that were common in these parts back then. They have since disappeared, replaced by smaller, nicer, more modern forms of local transportation.

We climbed aboard the chicken bus and returned to our hotel on the mountaintop.

Two days later, we went back to the state capital for another night, and then we bused to Guadalajara again for their flight back to Atlanta. Neither ever returned, but they did come that once. My daughter has yet to visit.

Yesterday afternoon, we drove to Eronga, parked the Honda on the small plaza, bought ice cream and sat on a plaza bench, the same steel bench on which I sat with my sister and mother 19 years ago. Facing across the street, I snapped the above photo.

I think about the visit of my mother and sister every time I sit on the plaza of Erongaricuaro, which I do now and then because it’s not that far from the Hacienda. But on that late, rainy afternoon 19 years ago, it seemed to the three of us that we were in the middle of nowhere. And then there was that ride on the chicken bus.

My mother is long dead. My sister lives, I think, in Arcata, California, and my daughter lives in Athens, Georgia. I have no other Gringo relatives.

But I’ll always have Eronga. 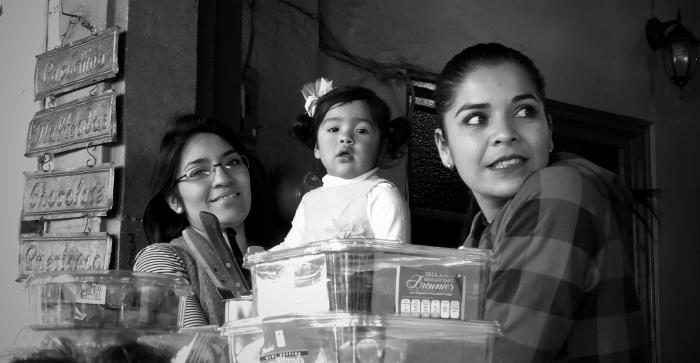 WHILE MY surviving Gringa relatives — all two of them — above the Rio Bravo have vanished, lamentably, into the shadows of the past, I have no lack of family that I’ve married into.

I took this shot downtown earlier this week. One of the newer relatives is that smaller example in the middle. Her name is Paula Romina, and she’s very nice, not quite 2 years old.

And so do I. That’s not my child bride holding Paula Romina, however. That’s her mama, Margarita.

This young woman is named Alma, which is  Spanish for soul. She is the widow of our nephew who died two years ago at 32 from cancer. We took the nephew to the state capital for chemo treatments almost weekly for a year, but it did not work out.

They are good people. Buena gente.* A picnic is scheduled this afternoon, and the main dish will be roasted chicken.

* With a couple of exceptions.

WHEN I MOVED to Mexico 19 years ago next month, this is the city in which I initially lived — above a garage.

Unlike most folks who relocate below the Rio Bravo, I did almost no research beforehand. What investigating I did was almost entirely hunting online for a language school that was not too far from Mexico City.

I had a girlfriend of sorts in Mexico City but, not being a masochist, I did not want to live in the chaotic national capital.

I stayed in the capital city for just eight months before moving to my mountaintop town of about 80,000 souls that’s located 50 kilometers to the southwest up a modern, four-lane highway.

Having the big city nearby makes living in my hardscrabble backwater considerably more bearable. We drive down there once a week for shopping, a good meal and the occasional odds & ends.

Our dentist is there, and our internist too.

My child bride did post-graduate study in Madrid in the mid-1990s. She often would get irritated at Spaniards who believed Mexico consisted entirely of dirt roads and burros.

In many respects, living here is better than living above the Rio Bravo.

THINGS HAVE flown out of control above the Rio Bravo since I departed. I hope I am not to blame, the lack of my stabilizing presence.

Every morning, on reading the Gringo news online, I get one new shock after another, and it seems to be worsening.

A few days ago, a teacher in California banned holiday candy canes in her class because they’re shaped like a J, and that could stand for Jesus!

These loony events are legion in the United States, but you do not encounter them in Mexico.

Of particular note is the sex insanity. A subset of that is letting men who are posing as women play in women’s sports. Of course, the fake women always win, and the real women always lose.

The most recent example is a guy named Hannah Mouncey who is playing for Australia’s Women’s Handball League, whatever that is. Yes, this happened in Australia, but similar things occur in the United States.

Hannah Mouncey is 6 feet, 2 inches tall and weighs 220 pounds. The women he plays against are, well, not even close.

This lunacy is almost, or probably entirely, confined to the historically white world, the United States, Canada, Australia and Western Europe where, not coincidentally, political correctness runs amok.

Latin America does not do this, nor does Asia or Africa. It’s a mental disease of the White Man’s World.

The ability to think rationally is necessary for a functioning society, and rationality is vanishing where it matters most. This must make China very happy. Don’t underestimate the importance of that.